Not all treatments work equally well. The scientific community has conducted and published over 1000 clinical trials of various addiction treatments, and today we have a list of practices and treatments based on evidence of what interventions produce the best outcomes. While the degree of evidence varies for different treatments, you will benefit from utilizing treatment programs and clinicians that support use of practices on the list.

Why are evidence-based treatments important?

Evidence-based practices and treatments are important because they provide you the best assurance that addiction treatment will work, and that the time and money you invest will pay off. While there is a lot of details involved in deciding what is evidence-based, it’s not necessary that you know the definition of a randomized clinical trial or quasi-experimental design. What is important is that you know that not all treatments being delivered today use evidence-based interventions, and seek out those that do.

For example, many treatment programs – both outpatient and residential – rely on general counseling, mandated Alcoholics Anonymous meetings, confrontational interventions, and use of educational lectures and films to help you better understand and overcome addiction. But none of these interventions have sufficient evidence that they work. Yet, they are all used frequently by clinicians who are not up to speed on how best to help someone who struggles with addiction.

In contrast, cognitive-behavioral treatment, use of the community reinforcement approach, motivational interviewing, addiction medications, and social skills training all have been rigorously tested in multiple research studies and shown to be effective in producing positive outcomes.

Another example which I have mentioned elsewhere on this site, is what research says about the difference between residential and intensive outpatient treatment outcomes. This is an important question because the costs of delivering care in these two settings differs significantly. And what does the research conclude? Residential and intensive outpatient treatment produce similar outcomes for most people.

Are there interventions that can produce good outcomes that are not on the list? Sure, not everything that works to change behavior gets researched. And truth be told, at times new research comes along the trumps the old and leads to better interventions. So just because something is evidence-based does not mean it’s forever carved in stone. The key point is that as a consumer you should use it as a starting point in your comparison of programs or clinicians.

What role should evidence-based practices play in selecting treatment?

This is a bit tricky to answer because there is more to overcoming addiction than just picking an evidence-based practice and believing it will solve all your problems. If you have not read about the 5 Actions, I urge you do so. The reason is that the 5 Actions framework will help you understand the big picture of what needs to happen to successfully overcome addiction. It’s a framework because within each of the actions, are specific evidence-based practices that you will want to utilize at different times.

Because addiction for most is chronic condition requiring intervention over years and often a lifetime, evidence-based interventions that we use early in treatment are often different than those we employ months or years later when a period of sobriety time has been established.

How do evidence-based interventions fit into the 5 Actions framework?

In the table below I list some of the evidence-based interventions, and how they line-up within the 5 Actions framework. There are of course others, but this give you an idea of what the big picture looks like. 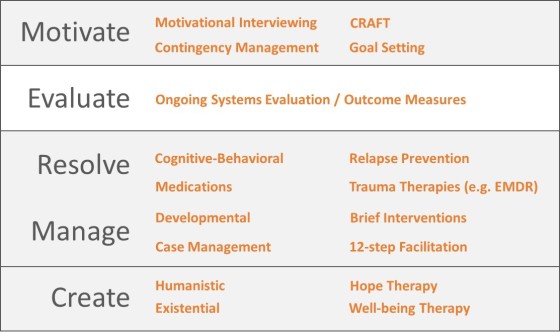